Art in the Garden

ART IN THE GARDEN

Queens Botanical Garden presents exhibitions created by local artists in the Visitor & Administration Building Gallery* as well as outdoors throughout the Garden.

Learn more about our current exhibitions below.

*Due to new COVID-19 safety guidelines, the Visitor & Administration  Building is closed to the public until further notice.

With Every Fiber of Our Being  by Soraya Navia 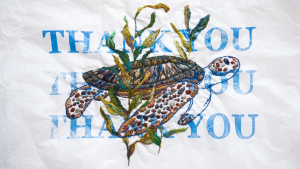 With Every Fiber of Our Being is an ocean conservation-focused exhibition that invites us to reflect on the issue of pollution from the perspective of the marine animals directly impacted by plastic waste. Fiber artist and graphic designer Soraya Navia transforms everyday materials into upcycled canvases that become both the foundation and inspiration for hand-embroidered portraits of underwater life.

This exhibition is made possible (in part) by the Queens Council on the Arts with public funds from theNew York City Department of Cultural Affairs in partnership with the City Council. 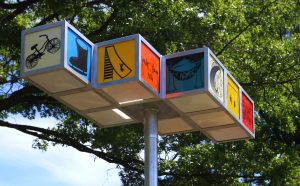 Conocer y Compartir – We Find Each Other
By Mobile Print Power

On view in the Arboretum / Meadow

Conocer y Compartir – We Find Each Other is a series of illuminated sculptures inspired by the lampposts from the 1964 New York World’s Fair. The sculptures feature screenprinted artwork created with visitors to QBG in April 2019. The project was previously on view in Flushing Meadows Corona Park. 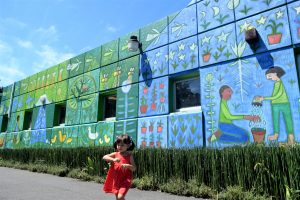 
On view at the Education Building

Artist Pasqualina Azzarello (@pasqualinaazzarello), with help from Queens Botanical Garden summer interns and participants from Junior Naturalists program, painted a beautiful mural on the exterior walls of our Education Building, filling the space with everything the Garden is about: people, plants, and cultures. Check it out in person during open hours. 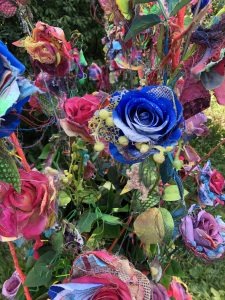 On view July 21 through September 8

AnkhLave Arts Alliance works to to provide inclusive representation of people of diverse ethnicities within the contemporary art conversation. AnkhLave has selected six Queens-based artists to create site specific art installations within the grounds of Queens Botanical Garden (QBG). By presenting artists and art-making in a nontraditional setting like the QBG, AnkhLave aims to promote artists of color who represent and reflect the Garden’s visiting audience.

Click the button below to learn about each artist and preview artwork by AnkhLave Arts Alliance at Queens Botanical Garden!

Recollections: Highlights from Our Permanent Collection 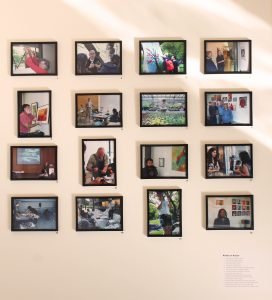 As we look forward to a new decade, Queens Botanical Garden is celebrating the ten-year anniversary of our Visitor & Administration Building Gallery by taking the time to look back and highlight the art and artists that graced our space during the last decade.

Recollections presents a selection of highlights from our permanent collection of works donated by artists who have exhibited here starting in 2009. These diverse works visualize our mission of connecting people, plants, and cultures through a multitude of media, subject, and inspirations.

Marbles in the Valley 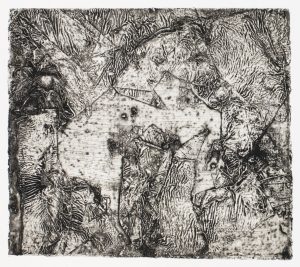 Marbles in the Valley is an exhibition of prints and photographs that portrays nostalgic landscapes reminiscent of the native countries of the borough’s diverse communities. Born and raised in Corona, Queens to Honduran parents, artist Nancy Paredes depicts the distorted memories of immigrants and the imaginings of a first generation.

This exhibition centers around a series of collagraphs of abstract
landscapes printed from the layering of plastic shopping bags.
Accompanying the collagraphs are otherworldly photographs that
extend into a different timeline, offering a second perspective of these
familiar places.

On view throughout the Garden
Through Thursday, September 12

Giant inflatable flowers greet you at Queens Botanical Garden! Created by PLAYLAB, INC., “Grown Up Flowers” imagines flowers inflated many times their normal size, giving visitors a new perspective on these iconic and playful representations of beauty. Take selfies with four larger-than-life flowers for a fantastical time at the Garden. 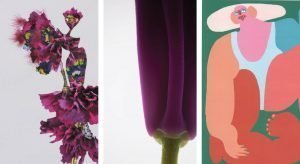 In Full Bloom presents the work of three artists, Darya Warner, Amber Vittoria, and Jamie Pesavento. Each artist has created a series of works inspired by the shape and form of flowers, plants, and bodies in nature. 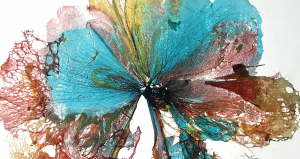 Organic Emergence was curated in partnership with Samadhi Advisors. 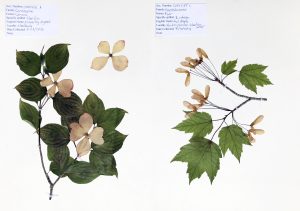 IMPRESSIVE PLANTS, SELECTIONS FROM OUR HERBARIUM

From August 24 through November 18, explore the large variety of plant species that grow at QBG through this preserved collection of specimens. 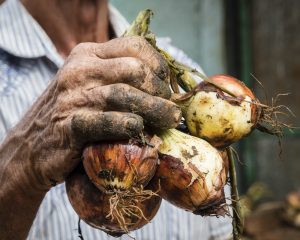 Our Botanical World showcases curated photographs by members of the Professional Women
Photographers group inspired by the botanical world and its impact on human life through all seasons. 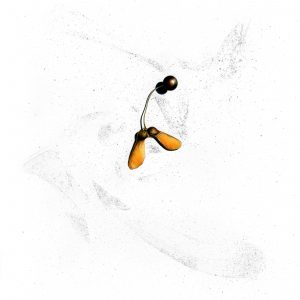 In HOPE, Laura Fantini’s intricately detailed pencil drawings of seeds, which she has collected throughout NYC and Italy, explore the fundamental power of seeds, new beginnings, and growth. 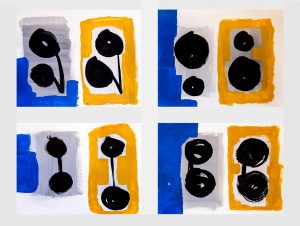 Through his paintings in Borderlines, artist Shahryar Shahamat shares his experience—boundaries and challenges—as a resident of New York City for the past seven years. 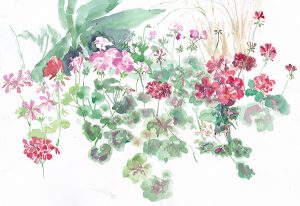 Sitting with the Garden is a collection of site-specific watercolor paintings by Che Min Hsiao, a Taiwanese painter based in Queens. Viewers will experience the beauty of Queens Botanical Garden filtered through the artist’s memories of nature in Taiwan.

This project is made possible (in part) by the Queens Council on the Arts with public funds from the New York City Department of Cultural Affairs in partnership with the City Council. 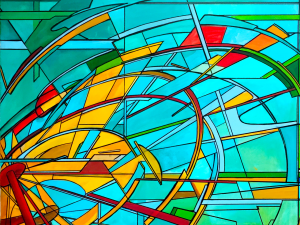 The Structure of Nature
By Zimer

Zimer learned the art of graffiti from the underground walls of Queens, New York. After developing his personal aesthetic, he increasingly adopted fine art principles into his paintings. The intertwined influences of Graffiti and Art History on his style have transcended it beyond traditional classification.

The Structure of Nature exhibited over a dozen paintings and a site-specific mural that fuse his modern, graffiti-style paint application with QBG’s LEED™ Platinum Certified Building through traditional still life and landscape subject matter.

In addition to exhibiting in galleries and creating murals, Zimer received his BA in architecture. His studio practice has included sculpture, fashion, furniture, animation and graphic design. Zimer has painted murals all over the world including: The New York Auto Show, Comic Con, The World Trade Center, Philadelphia Tattoo Convention, London’s South Bank, and the Northside Arts Festival. 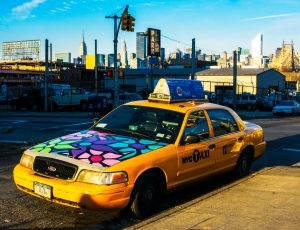 Queens based photographer, Vikram Dogra has lived in Astoria since 2000. He arrived as an immigrant from India in 1982 and has lived in West Virginia, North Carolina and Washington, DC. In the cradle of the multicultural landscape of Queens he found a place to love and belong. East of East River began as a photo series recording the unique makeup of both landscape and the people of Astoria and Long Island City and, eventually became a self-published photography book in 2015. These photographs capture a changing landscape of the neighborhoods from 2004-2015. The photographs combining street and fine-arts photography offer a unique and historical portrait of the ever changing neighborhoods.

Artist Manuel Macarrulla exhibits hand-crafted masks, drawings, and paintings inspired by carnivals and fantasies that incorporate nature and animal imagery, as well as his Dominican heritage. 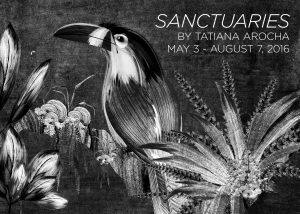 Visual artist Tatiana Arocha’s SANCTUARIES is a series of large-scale, intricately-layered reinventions of natural Colombian landscape, hand-constructed on digital canvases, printed, and arrayed into immersive murals. Both refuge and warning, SANCTUARIES uses a combination of natural specimens, human artifacts, and modern technologies to evoke a rainforest that is as lush as it is imperiled. 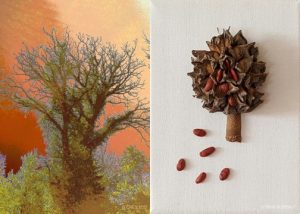 The Portraits of Tall Friends exhibit is a valentine in sculpture and photography, inspired by the amazing, abstract beauty of trees that live among us. It celebrates TreeSpeakArtist Frank Buddingh’ and photographer Carol Reid’s life-long bond with trees, and invites you to experience these great friends of mankind as remarkable works of art. 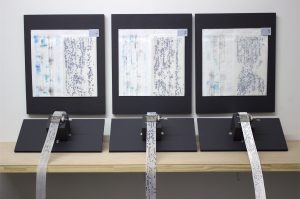 A SCORE IN GRAPHITE AND BLUE
By MAYEN ALCANTARA

A unique combination of both visual and aural art, Mayen Alcantara’s intimate piece will take the audience on a journey through Queens. The multimedia exhibit is a series of sound installations, played on modified music boxes, and includes drawings and graphic musical scores. To create each piece, Mayen and a Queens resident wear “seismograph” devices to trace movements and gestures into markings, which Alcantara then turns into sheet music ribbons for participants to handcrank through music boxes. This collection of transcriptions is rooted in the moment when oral storytelling traditions overlap with modern-day record keeping.